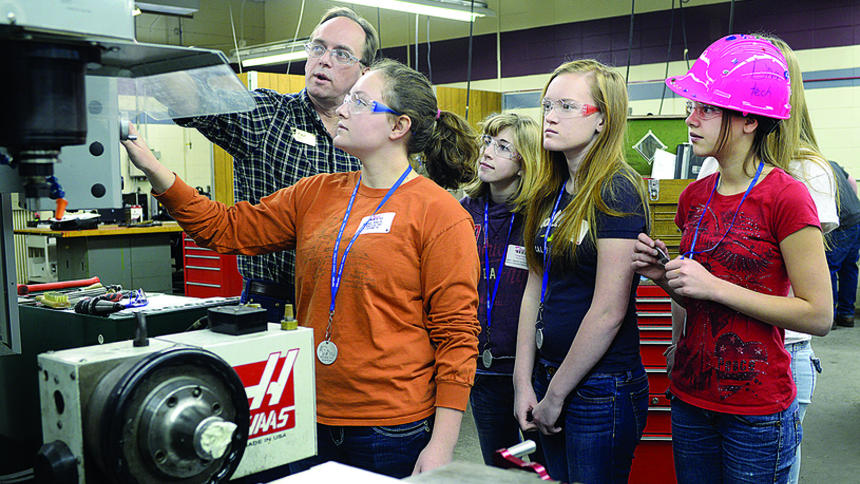 “It gives me a glimpse of the real world,” said Northwestern Middle School eighth grader Tiana Hursh. Although she’s set on a career in interior design, Tiana enjoyed her peek at WITC’s opportunities.

“We need to explore and get ready,” she said.

“Diva Tech” took 34 girls from the Maple, Northwood and South Shore school districts behind the scenes to test drive some courses in trade and technical careers.

“It inspires kids to do stuff,” said Myranda Breezee, an eighth grader at Northwestern Middle School. “Kids nowadays need a lot of motivation.”

Curiosity led fellow eighth graders Natalie McDermott and Abigail “Abby” Nelson to sign up for the day-long event. Both divas were impressed by the broad spectrum of courses available.

“I really like this place,” Abby said after changing tires on a vehicle.

Some students were already leaning toward careers in the technical field. Others were undecided. Wednesday’s event was for all of them.

“It’s just getting the kids to understand that they can start from scratch and actually build something,” said Paul Kalin, a machine tool instructor at WITC. “So whether they actually go on to do things like what I do or go on to engineering or go on to nursing, they understand what it takes to manufacture that product and everything that goes into it.”

Each of the divas who stopped by the automotive shop learned valuable information.

“It gives them a great perspective,” said automotive instructor Terry Glanville. Participants said used oil is dark and smells like barbecue sauce; they learned tire pressure gauges can let air out of an overinflated tire; and found it really doesn’t take much time to change a tire.

“We’ve been here before as like a tour, but this is awesome because they’re actually seeing how the machines work and they’re getting to actually do stuff, so I like the hands-on part of it,” said Jaimi Teal, an eighth grade math and science teacher at Northwestern Middle School. “It’s just an amazing opportunity for them.”

For many, the tour held a blast from the past.

“What’s really cool is we have a lot of Northwestern students that are students at WITC teaching them,” said Jody Forsythe, a school-to-work and at risk educator at Northwestern High School. “Every session I’ve gone to I’ve seen a Northwestern graduate. It’s been really nice to see them. And then, too, for the girls its familiar faces that they see.”

Making the day girls-only encouraged the students to step up and get their hands dirty, educators said.

“This is really nice again because it’s just girls, so the girls who maybe wouldn’t have tried stuff are trying it,” Forsythe said.

Although these fields are male-dominated, instructors say their female students have excelled.

“Between the fine motor skills that are required and being able to multi task and the precision that’s involved, all of those are skills that females are just really strong in,” said WITC career specialist Kayti Stolp. “They do really well in the program.”

The sooner the divas know they’re interested, the less time they’ll have to wait.

“I was just talking with the welding professor and there’s a two-year waiting list,” Forsythe said. “So it’s really good if the girls want to get into this that they try it now and get on the list.”

Don’t let the fact that they’re male-dominated fields phase you, said Kalin’s daughter Olivia, one of the eighth-graders who attended the event.

“They should know that it’s OK to do what you want,” she said.

The students were able to choose two of seven different career fields to explore, then capped off the day with a visit to a local manufacturer. The visit allowed them to check out some of the growing industries in the area.

“Getting them classroom experience, talking with professionals and then seeing the actual ‘What does this job look like,’ solidifying that for them, is really great,” Forsythe said.

Even teachers learned something. Teal said educators are increasingly being expected to incorporate technology into lessons.

“It’s easier for me to see and then transition what I’m teaching them into what they’ll be doing in real life,” she said. “Sometimes in the classroom I don’t always see the next step so it’s nice for me to see what that new technology looks like in action.”