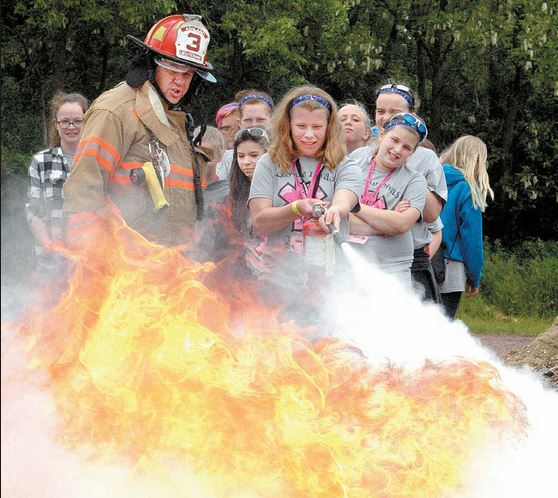 Approximately only about one-third of the nation’s emergency medical technicians and paramedics are women. Because of that shortage of female emergency medical staff, Carrie Miller, the Northwest Wisconsin Concentrated Employment Program, Inc. (CEP, Inc.) Focused Initiative Manager and volunteer EMT with the Washburn Area Ambulance, had an idea to do something about it.

“Rescue Divas came about because there is an increasing shortage of EMTs in our region and there’s been lots of efforts to get the word out, but it’s not making that big of a difference,” Miller said. “So instead of doing the same thing over and over but hoping for different results, we wanted to do something totally different. We’re going for a non-traditional recruitment.”

Since the female demographic isn’t as highly represented as their male counterparts, it made sense to reach out to them and try to get them interested and excited about careers in Emergency Medical Services

“We need EMTs and we know that this group isn’t represented as highly,” Miller said.

CEP, Inc. first got a planning grant from the Wisconsin Office of Rural Health, which funded them so they could spend a year figuring out the logistics. CEP, Inc. reported on how they

would do it and WORH liked the idea, so they gave them a $15,000 implementation grant to make it a reality.

There was no charge for the girls to attend the Rescue Divas camp.

The program was spearheaded by CEP, Inc. with help from the Bayfield-Ashland County EMS Council, Memorial Medical Center of Ashland, and Wisconsin Indianhead Technical College – Ashland.

They originally planned to target high school girls. However, they realized during their planning year that high school girls are harder to get involved because of jobs, relationships and that many of them already have an idea of what they want to do after college.

“We decided to go with middle school girls,” Miller said, “and catch them before a lot of those things where in place.”

The week-long, hands-on residential camp began Sunday afternoon and concluded on Thursday with an awards ceremony. Every day was a different experience for the 20 campers, three full-time staff and numerous volunteers who helped out over the course of the week.

They had speakers, field trips, campfires, picnics, games, an obstacle course, CPR and first-aid training. Some of the highlights from the week included a visit from the K-9 Search and Rescue from Sawyer County, a presentation from Life Link III Helicopter and a trip to the Ashland Fire Department and Memorial Medical Center, just to name a few of the activities designed to give the girls a taste of emergency medical careers.

“When you open the door to different career opportunities, like EMS, kids are really excited,” Miller said. “They are really open to new and different opportunities so when you are able to show them a different world you’re really increasing their ability to choose.”

After packing so many fun and exciting things into the week, Miller said everyone was getting pretty exhausted but she didn’t think they would want to change anything, attributing it to the nature of a residential camp and observing an added benefit.

“I think it’s good to be tired and work though it and still go with these amazing things because it’s kind of the life of an EMT/Paramedic,” said Miller, “You’re in a station 24 hours on and so you get the feeling of how it is. You’re going to go on calls when you’re tired, you’re going to maybe do some continuing education when you’re tired, so tired got nothing on us.”

Miller believes they are making a huge difference with the girls. She hopes to keep Rescue Divas going and expand the camp to include high school girls and eventually even a one-day program for elementary school girls.

A lot of the campers have already asked to come back next year. Miller said they would love for them to be able to keep coming back, depending upon the programs funding, but they also want to broaden the net and get as many girls involved as they can.

She hopes to be able to implement a counselor in training, to counselor opportunities for girls who’ve been at camp and feel very strongly about the program.

“My biggest passion in life is EMS,” said Miller, “I do it as a volunteer but being able to share this with girls is an amazing opportunity not only for them but for myself.”

Miller hopes the Rescue Divas can be a long-term solution but there is still a current need in our area.

“This is the time to step up and become a volunteer EMT if you have any interest or ability.”

Anyone interested in becoming a volunteer EMT or finding out other ways to get involved should contact their local ambulance service.