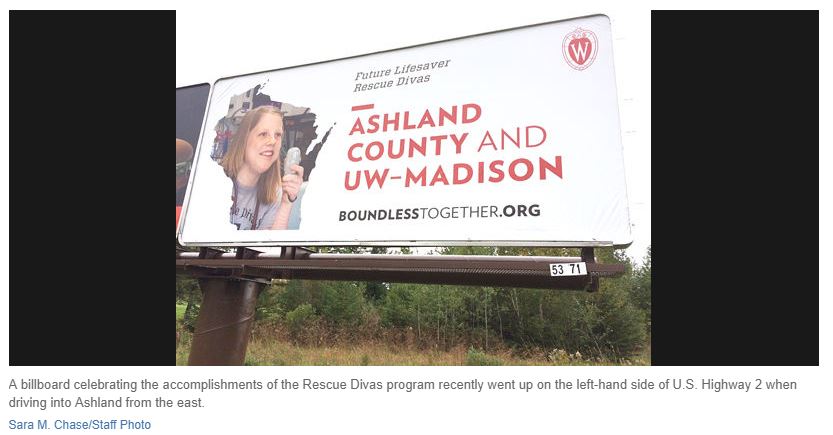 Rescue Divas has been selected to represent Ashland County as part of a new ad campaign launched by UW-Madison known as Project 72 with the slogan, “Boundless Together.”

Carrie Okey, the Rescue Divas creator, Northwest Wisconsin CEP Focused Initiatives Manager and volunteer EMT with the Washburn Area Ambulance, said while she knows this project as “Boundless Together,” it’s being called “Project 72” because they are highlighting a program in each of Wisconsin’s 72 counties.

“They sought us out for this project,” Okey said. “The first two years of Rescue Divas were funded by the Wisconsin Office of Rural Health, which operated through the UW-Madison. Our contact there, Kevin Jacobson, was a big supporter of Rescue Divas. He understood our vision and helped us grow the program.”

The inaugural Rescue Divas EMS Summer Camp for Girls was held in June of 2015 at Northland College and again the following year in June of 2016 at Camp Northwoods in Mason.

“Rescue Divas is a five-day residential camp experience, focusing on educating and exciting middle-school age girls about careers (or volunteer positions) in Emergency Medicine,” Okey said. “Throughout the week, girls participate in exploratory, hands-on activities that focus on a variety of skills and knowledge in Emergency Medical careers.”

Okey added that during the week they also receive training in First Aid, CPR, and AED use.

“The billboard went up last week,” Okey said. “We are crazy excited about this advertising!”

The billboard is located near three other billboards on the left-hand side of U.S. Hwy 2 when driving into Ashland from the east.

“It’s great to know that Rescue Divas transcends northern Wisconsin,” Okey said. “This acknowledgement means the program will get some more attention and hopefully draw more campers and program volunteers.”

Okey said it also helps to get the word out that EMTs are needed in all of our rural ambulance services.

“It’s important for people to understand that Rescue Divas was created to address the growing shortage of EMTs in rural areas, as well as the state and country in general,” Okey said. “Rescue Divas also aims to increase the percentage of women in EMS from 30 percent to, at least, 50 percent — if not more and at all levels, including advanced.”

Okey said Rescue Divas is also a ton of fun.

“It allows EMS personnel to share their passion and excitement for EMS with middle school girls who might not ever be exposed to EMS otherwise,” she said. “Also, there are Search and Rescue dogs, air ambulances (medical helicopters), and lights & sirens– who wouldn’t want to be a Rescue Diva?”

Okey wanted to repeat the fact that there is current a shortage of Emergency Medical Personnel in the area.

“We need more people interested in helping their communities by becoming EMTs,” she said. “We need to ensure that there will be someone to answer the call when a neighbor, a friend, or a family member needs emergency care. If not you, then who? If not now, then when?”

Okey encouraged people to check out the Wisconsin & UW-Madison: Boundless Together website, allwaysforward.org/wi/

“Click on Ashland County and you will see more about us,” she said.