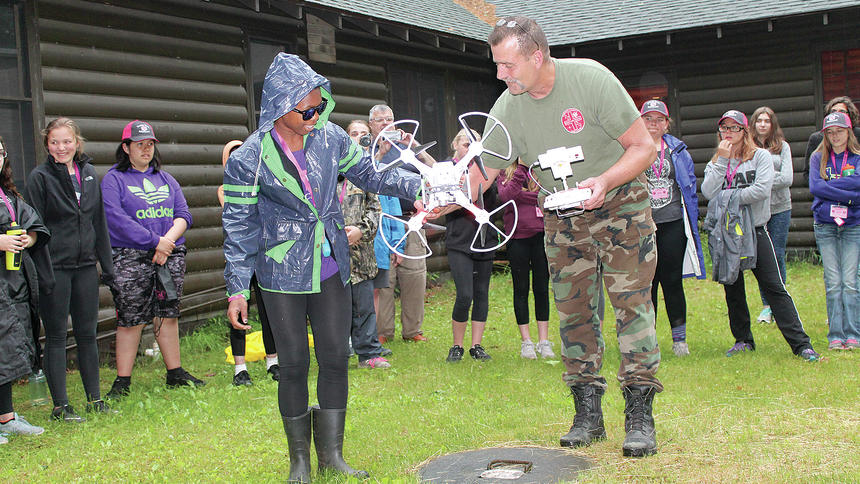 Middle school girls dove into the world of emergency medical careers this week at Camp Northwoods in Bayfield County. These Rescue Divas tested their self-defense moves, learned how to read a compass and discovered the importance of dogs in search and rescue work. And that was just Tuesday.

“My family, especially my grandparents, are really involved with EMS (Emergency Medical Service) for Iron River and Bayfield County,” said Halie Matthias, 14, of Superior. “I thought it’d be cool to see what they do daily.”

She wasn’t sure what to expect when she got to camp Sunday.

“It surprised me how much easier it is to, like, learn,” Halie said. “I thought it would take us like four days to learn CPR. It’s actually a lot easier to learn than I expected.”

In an hour and a half Monday, they got the basics down.

“It’s actually really fun and it’s nice to learn all this stuff just in case,” said Makayla Anderson, 14, of Superior.

This is the third year the Rescue Divas camp has been offered, but the first year it was opened up to students in Douglas, Iron, Rusk, Washburn, Sawyer and Burnett counties.

“I started it because we know there’s an impending shortage of EMTs (Emergency Medical Technicians) in our rural area,” said Carrie Okey, who has been an EMT in Washburn for 14 years. “And we know it gets harder and harder to recruit. So we wanted to come up with a fun, new, unique way to recruit EMTs.”

Many of the students who take part in the five-day camp have close ties to emergency responders.

“I went because my mom is an EMT for Bayfield and my dad is ski patrol,” said Arfee Edwards, 13, of Bayfield. “So they’re both in medical fields. I think it’d be fun to do, be an EMT, and work with them, but I kind of like sports.”

One Superior student was prompted to become a Rescue Diva after a close brush with emergency responders.

“I got hit by a car a year and a half ago,” said Makayla. “And seeing the paramedics kind of like help me out and everything, that kind of inspired me to help other people. I kind of wanted to come here for that.”

Okey chose to gear the program to middle school girls because high school students are already picking career paths and often work over the summer. Women are also underrepresented in the emergency medical field.

“It’s kind of the idea that little boys have been exposed to fire trucks and police cars, you know, and we just wanted to make sure that girls got the opportunity to be exposed to ambulances and helicopters, and search and rescue dogs, and things like that, just excite and stir some interest in them,” Okey said.

The cost to attend camp was minimal — $35 per camper — thanks to the major funding from Northwest Wisconsin Area Health Education Center.

Tuesday afternoon, members of Sawyer County Search and Rescue visited with compasses, dogs, a drone and plenty of enthusiasm.

She led a team of girls as they followed a set of muddy tracks, teaching them the importance of low-tech methods involving sticks, rubber bands, pencils, paper and compasses.

“When I was younger, this was not even something I thought about,” said fellow search and rescue member, Jessica Kujala.

Sawyer County Search and Rescue was founded following the 9/11 attacks in 2001. It was created as a youth program, and has trained about 136 young people over the years. The team, which is funded by grants, donations and fundraisers, is called out between 10 to 24 times a year to search for missing people.

“We prepare as much as we can,” said team coordinator Pat Sanchez, although they hope they never get called out. “It’s actually a lot of fun.”

Makayla expressed an interest in becoming a dog handler; Kaylee’s got her eye on a career as a surgeon. Halie and Arfee said they’d like to try out Tae Kwon Do.

Rescue Divas aims to give them, and their families, a glimpse at possibilities and a message that there is a need for medical volunteers.

“From the first camp that we ever had, one of the dads went back to become an EMT,” Okey said. “He’s working as an EMT now and he’s actually going to further and become a paramedic. So I really try to tell people it’s not just the 20 campers, it’s everyone that the word touches.”

Learn more on the Rescue Divas Facebook page or visit nwcep.org and find Rescue Divas under the career exploration section. Learn more about Sawyer County Search and Rescue on Facebook or email psanchez@sawyercountygov.org.